Fields of work of child and youth services professionals

In 2018/2019 there were almost 1.1 million people working in the field of child and youth services, or 2.4% of all gainfully employed persons in Germany. 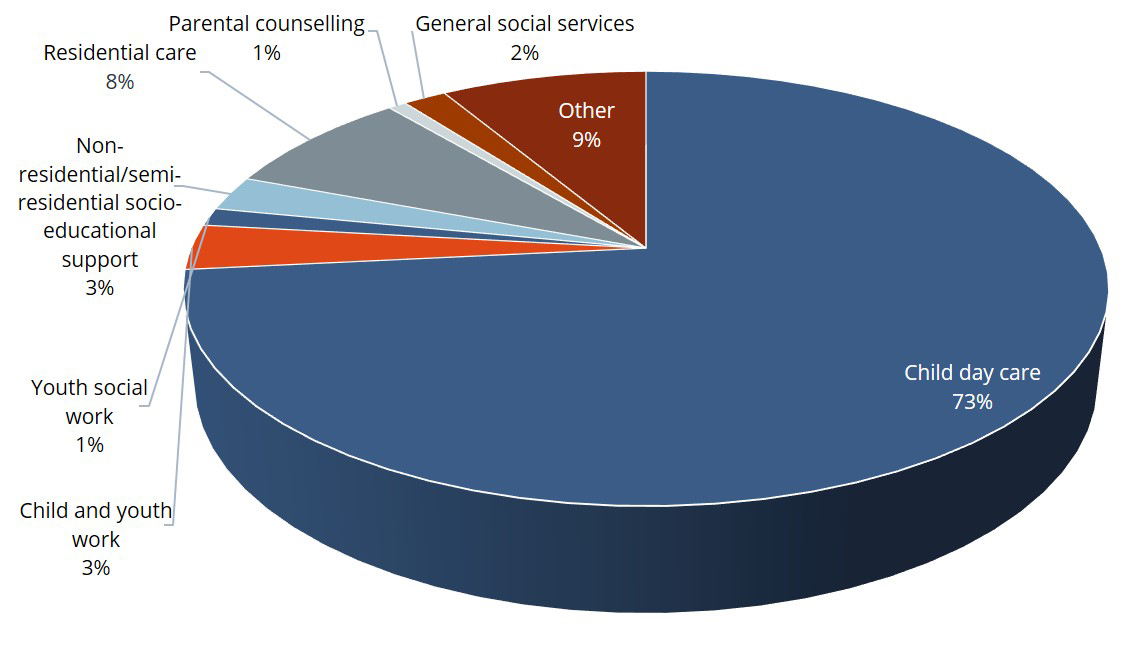 In 2018/19 there were 1.1 million people working in the field of child and youth services in Germany. This puts the headcount higher than in several other major German industries, including the agriculture and auto industries. For comparison: in 2016 agricultural businesses employed a total of 940,100 workers. Around 873,000 people were recorded as working in the "manufacture of motor vehicles, trailers and semi-trailers" sector in 2018. The high relevance of child and youth services goes back to its extremely dynamic development ever since the mid-2000s.

Of the 1.1 million people working in child and youth services, in 2018/19 around 951,000 worked in education or administration. Between 2006/7 and 2018/19 the number of people employed in these areas increased by around 383,000 or 67%. In addition, in 2018/19 roughly 125,000 people worked in the housekeeping and technology fields. Added to this are numerous voluntary and unpaid roles that are not systematically counted as part of Germany's official statistics.

Most employees working in education or administration (73%) form part of the child day-care field (child day-care centres and nurseries). This field has also largely driven the Germany-wide increase in staffing in recent years, mainly due to concerted efforts to expand day-care places for the under-threes and to extend all-day programmes in child day-care centres, but also as a result of positive changes to child-teacher ratios and the unexpectedly strong demographic growth in the target group for these services through rising birth rates and immigration. Here alone, the number of employees nationwide has risen almost linearly by just under 300,000 (+75%) since 2007.

Other major fields of work, which include, inter alia, socio-educational support services or the general social services, have also contributed to this growth spike with a total increase of around 84,000 employees since 2006 (+50%). However, growth is not ubiquitous across all areas of child and youth services: for example, the number of people working in child and youth work fell overall by around 5% between 2006 and 2018.